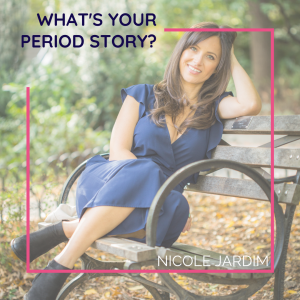 Do you know what day of the month it is?

More importantly, do you know what day of your menstrual cycle you’re on?

If you’re like many women, you are probably pretty mystified by your period and cycle in general, so you’re not alone if you don’t know.

I used to be that girl. At doctor’s appointments, when the inevitable question was asked “When was your last period Nicole?”, I’d look like I was thinking really hard and say “Oh, my period was March 9th” with so much confidence.

Ha, of course I was lying through my teeth because I had absolutely no idea! Little did I know then that not knowing those simple facts would be rather detrimental to my health later on.

My Period Story had a rocky start

Some of you know my story and in fact many of you are probably living in one stage or another of my “period story.” It all began in my teens (doesn’t it always? *wink*), with really really ferocious periods.

My mom said, “you think this is bad Nicole? I used to be in bed for days at a time.” Ugh. So I just accepted that this must be my lot in life.

Then something strange happened. I stopped getting my period every month. Hmmm…that didn’t seem quite right but a huge part of me was relieved that I didn’t have to deal with the period drama every month.

The problem is, when your period stops, it doesn’t usually start again unless you make some changes. And I was not making any changes. To be fair, I didn’t even know I needed to make changes!

My Period Panacea or?

So off I went to the gynecologist where I was prescribed the birth control pill and sent on my way. I took it for 5 years. I got my period every month, it lasted for maybe two days, had barely any cramps, no bloating, none of the she-monster mood swings….a girl’s dream come true right?

At first I thought so but over time I noticed a whole lot of other issues cropping up.

All of these symptoms were evidence that the pill was no longer working for me. However, it took me a little while to figure that out!

Instead I saw a lot of conventional doctors who did a lot of tests and I got nothing. One thought I had Crohn’s disease, another thought it was rheumatoid arthritis (my mom has it so naturally I was a candidate).

Yet another doctor diagnosed IBS. My gynecologist suggested I try a vaginal estrogen cream to get my sex drive back. Oy vey.

Taking matters into my own hands!

Clearly this approach was not working. So I decided to take back the reins and steer my health in a different direction.

It led me to an acupuncturist, a little Chinese man named Dr. Kim who at 65 had more energy than my 23-year old self. In the first visit he diagnosed and explained all of my ailments. Miraculous.

I’d been trying to get a straight answer for years and this dude gave me what I needed in 30 minutes.

I saw him for years and he blew the door off my conventional-medicine ways of thinking. I was introduced to herbs, better ways of eating, bio-feedback, qi-gong…you name it. I also finally ditched my pill and started getting my period normally for the first time in my life.

For years I tried every alternative medical treatment out there – network spinal analysis, colonics, infra-red saunas, laser hair removal –  oh does that not count? Haha!

This led me to The Institute for Integrative Nutrition in New York where I got certified to be a holistic health coach. I knew I had to help as many women as I could get my hands on so I then went on to train with Dr. Sara Gottfried, the queen of hormonal health, Dr. Jessica Drummond and Chris Kresser – masters in the field of women’s health and functional medicine.

Why the heck this should matter for you?

It’s been 14 years since I first saw Dr. Kim and changed the trajectory of my life. Back then if you had told me I’d be doing what I do now I’d have said, “Girl, puleese!” Yet here I am. Your personal period fixer-upper!

Back in 2012 I created Fix Your Period, a series of programs to help women heal their menstrual conditions in a sassy and fun way. I designed my programs on the belief that fixing your period doesn’t have to be painful or difficult, but rather fun.

It takes effort, but doesn’t have to be hard; I’m not trying to restrict anybody – I literally want flow; once your body is flowing, your period will follow. I also don’t want it to be overwhelming – because menstrual problems are overwhelming enough!

This has been a number of years in the making and I’m beyond thrilled to continue to share my work with women all over the world who might not otherwise have access to this kind of information.

1. You’ve tried everything – birth control, medication…maybe even surgery – and STILL your menstrual health is a mess.

2. You feel lost and don’t know what to do, who to trust, or where to start.

…then I am speaking to you girl!

If you’re identifying with being in one of those two places, or something like that, then this program is for you. You can learn all about the Fix Your Period programs here!

Here’s to Happy Hormones for you!

14 thoughts on “What’s Your Period Story?”