How To Track Your Period With The Fertility Awareness Method 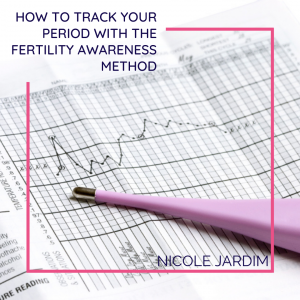 Tracking your period is a great way to get to know your gorgeous body from the inside out! It will empower you to make more educated decisions about your health and wellness.

“Women who chart are so aware of what is normal for themselves that they can help their doctor determine irregularities based on their own cycles, rather than the average woman’s symptoms.” -Toni Weschler, MPH, Taking Charge of Your Fertility

How many times have you noticed spotting at odd times in your cycle, or cervical fluid that doesn’t look quite right, felt a sharp pain in your side, or even felt a breast lump that caused panic? All of these experiences may cause panic and confusion but they can actually be normal occurrences if they take place at the appropriate time in your cycle.

Knowing when you are ovulating is not only good if you are trying to conceive, it is equally helpful for when you aren’t trying. Sperm can live in the body for up to 5 days. An unfertilized egg can only live for 24 hours, after that the perfect conditions have passed and your body prepares to release the egg. As you can see this isn’t a huge window of opportunity for those who are trying to conceive. On the flip side this can feel like a gigantic window of opportunity if you aren’t!

WHAT EXACTLY DOES TRACKING YOUR PERIOD INVOLVE?

When we know our unique cervical fluid patterns, we are able to determine when we are fertile and when we are not.

Once our cervical fluid starts taking on a wetter consistency, that is, if it starts becoming creamy, watery, egg-white-like and/or has a slippery sensation, we should have protected sex or abstain if we are trying to avoid pregnancy. Basically, anytime your cervical fluid is wet (creamy, watery or egg-white) or has a slippery sensation before ovulation, you could get pregnant.

This is because we don’t necessarily know when ovulation has occurred until after it has happened, either with the change in cervical fluid or the basal temperature rise or both.

Ovulation usually occurs 1-2 days after your peak day but sometimes it can occur on the same day as the peak day. This will become easier once you’ve tracked for 3-4 cycles.

Cervical fluid will typically be dry until your next period but sometimes there is a small estrogen surge about a week before your period and you may see some wet cervical fluid. This is not ovulation.

Does ovulation occur when my cervical fluid is most abundant, or afterwards?

Every woman has one day in her cycle that is more fertile than any other day, but that day is not usually the day she ovulates!

For the most part, your most fertile day is considered the last day that you produce fertile quality cervical fluid or have a wet vaginal sensation for any given cycle. It is called the “Peak Day,” because it represents your peak day of fertility.

This day usually occurs a day or two before you ovulate, or occasionally on the day of ovulation itself.

You will only be able to determine it in retrospect, on the following day. This is because you can only recognize it after your cervical fluid and wet vaginal sensation have already begun to dry up. This concept should become easy to grasp within 3-4 cycles of charting, though.

Also note that the Peak Day is not necessarily the day of the greatest quantity of cervical fluid or the most wetness. In fact, the greatest amount could occur a day or two before your Peak Day. For instance, if you have lots of egg-white CF on one day, then a little eggwhite CF the next day, and then sticky CF the third day, then the second day (with a little eggwhite CF) would be your Peak Day.

HOW TO CHART YOUR BASAL BODY TEMPERATURE

What is a BBT?

A basal body temperature is a person’s temperature first thing upon awakening. Before ovulation, your waking temperatures tend to be low, anywhere from 97.0 – 97.7. A day or two after ovulation, they will typically rise at least several tenths of a degree and stay elevated until your next period. Post-ovulatory temperatures usually rise to 97.8 degrees or higher. This is caused by the production of the heat-inducing hormone, progesterone. If you were to become pregnant they would usually remain high throughout much of your pregnancy.

How to take your BBT?

Take your temperature about the same time every day, first thing upon awakening, after at least three consecutive hours of sleep and before any other activity such as using the bathroom, brushing your teeth, or talking on the phone.

**Note that your temperature tends to rise about two tenths of a degree per hour that you take it later than usual.

Question: I started taking my temperature and it’s all over the place. What’s up with that and how can I fix it?

First of all, it takes about 3-4 months to start seeing a pattern for many women. So don’t freak out! The goal is to ultimately look for temperatures that are low pre-ovulation and high post ovulation. There should be a pretty distinct difference between the 1st and 2nd half of your cycle if you are ovulating.

Waking temps before ovulation should be between 97–97.7 degrees Fahrenheit or 36.1–36.5 Celsius. After ovulation temps should be about 97.8 and higher or 36.5 celsius and higher.

How to chart your BBT? 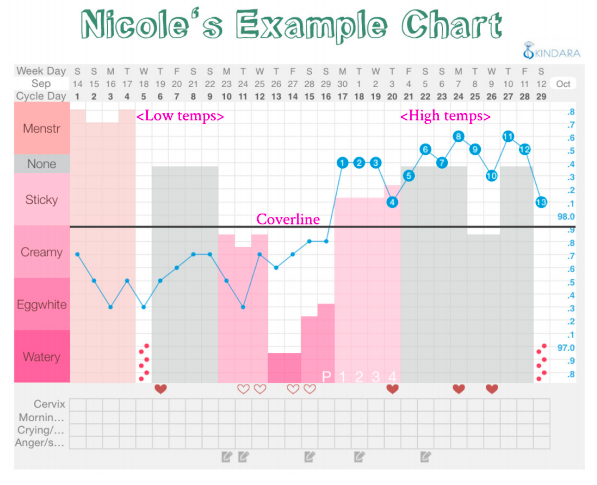 If you’re new to all of this and feeling freaked out, then I recommend you check out the Daysy Fertility Monitor. Daysy does a lot of the hard work for you, and will tell you whether you are fertile or infertile based on your basal body temperature. Check out my post on the Daysy and grab my sweet discount!