I may have Crohn’s Disease – now what? 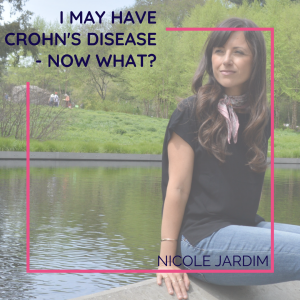 Tomorrow I find out if I have Crohn’s disease. I know, way to close out 2016 with a bang huh?

It’s actually not the first time I’ve come up against a possible Crohn’s diagnosis. You see, I suffered with chronic digestive health issues from the time I was 15 years old. And, when I was in the throes of my health challenges in my early 20’s, a gastroenterologist suggested I might have Crohn’s.

At that time I was seeing about six different doctors for all the darn problems I had – gut issues, joint pain, chronic urinary tract infections, hair loss, chronic colds – and after ALL my tests came back as either “normal” or inconclusive, I decided I’d finally had enough. No more doctors with their offers of the birth control pill, or drugs that were just gonna mask the symptoms.

Taking ownership of my health

I decided it was high time I invested in a brighter future for myself that included luminous health and better periods. I started with acupuncture and Chinese herbs, and went on to try literally a bazillion other healing modalities over the years.

It’s not lost on me that if I hadn’t gotten out of victim mode and taken back my power, I’d likely have full blown Crohn’s disease and severe quality-of-life-limiting health problems today. I’d also probably be on a cocktail of drugs to help me just get by.

Ugh, I literally can’t imagine that for myself because I soooo value the freedom to live my life with abandon! Spending the past fifteen years actively addressing my most significant health concerns has in essence, saved my life.

Ah, the ups and downs of life

But, here’s the deal…I’m no superhuman, and I have definitely eaten my fair share of crappy food and taken on boatloads of stress, especially in the last six years. Moving from Florida to New York, doing a 180 on my career, getting a divorce, having a long distance relationship, and running an online business from remote places on the planet can really do a girl in!

However, through all of this, I have always stuck with the core protocols of my Fix Your Period Program for staying healthy, or helping me get back on track when needed.

Last year though, was especially tough. I was living in Argentina with my boyfriend Haden, but things weren’t working and we decided to end our relationship. I moved back to the US, and then a few months later one of my oldest and dearest friends lost her husband very suddenly and I had to go back home to be there for her and her two kids.

You can read the entire story here if you’re really curious!

This tragic event actually brought Haden and I back together, but he was about to return to the US for the first time in 20 years, and was facing a court case with an uncertain outcome. He was also going to be moving into my studio apartment with me in NYC!

And then I got really sick!

All of this culminated in me getting REALLY SICK in March. It was like my body couldn’t handle one.more.thing. You know when you’re sick for so long that you forget what it’s like to be healthy and feel good? Yeah, I was “that kind of sick”.

I had a low grade fever for almost a month, the worst body aches imaginable, and severe abdominal pain and digestive distress. I could barely eat (a green smoothie and some bone broth here and there), and I literally laid in bed for most of that month.

I only left the house to go to the doctor (who said this was just a virus that was going around!), the ER (when things got really bad), and to do acupuncture, nutritional IV’s and colonics. NOTHING worked. Sometimes the fever would go away for a few hours, but then it came right back.

After 24 days, the fever finally broke for good and I started to feel better. I was able to see a functional medicine doctor (someone who looks at every aspect of your health and only prescribes drugs as the very last resort), and she immediately ordered a CT scan because of the pain in my abdomen that still lingered.

Unfortunately, the results showed that I had something called Ileitis, or inflammation of the ileum, which is often caused by Crohn’s.

I got better, but not totally better

Since I was feeling better, I had the energy to immediately ramp up my regimen by removing all grains and any other potential inflammation-causing foods from my diet. It wasn’t much at that point, but there were a few. I started following a gut healing protocol that I created for my Fix Your Period Program that included vegetable juices, bone broth, specific foods and supplements. I cut way back on my work projects and just did the bare minimum – which if you know me, was soooo hard!! Especially after taking three weeks off during my sickness.

Within a few weeks I was feeling brand new!! I also felt empowered, confident and in control of my health, which is my core teaching for every woman I meet who is struggling with her own set of symptoms.

It’s been about nine months since my illness and the pain in my lower right abdomen hasn’t completely gone away, so I finally decided to see a gastroenterologist. After reviewing the CT scan results and hearing my description of the symptoms, she also felt like I had Crohn’s and ordered a colonoscopy to get a definitive answer.

This entire experience has been a stark reminder that chronic overstimulation (stress!) and less than stellar food, can literally WIPE US OUT if we’re not careful. And, making better choices can transform not only our health, but also our entire life.

I was pretty bummed when the doctor suggested I may have Crohn’s, and I threw myself a big old pity party for about a day. But then I got real with myself —  what I am 1000% sure of is the fact that I have the knowledge and the tools to actually fix this, whatever it is, and I have those resources because I chose to take ownership of my well being all those years ago.

As a result, I am committed to addressing this condition (if I have it) in 2017, so I can continue to uplevel my health and contribute massively to the world. I’d love to invite you to do the same for your own health with my Fix Your Period Program, which happens to be 40% off until December 31st with the coupon code HOLIDAY2016. 🙂

In this program, I take EVERYTHING I have learned through my years of training, and break it down into a complete series of step-by-step protocols that are easy to understand and implement!

I passionately believe that all women (that’s you babe!) can and should be active participants in their health, and I’m dedicated to showing you how to do that in 2017.

My wish for you this coming year and always is to feel empowered and in control of your health and your body, and to fully own and talk openly about your period – the positive and negative stuff. This is why I do what I do – so that women everywhere can cultivate a deep understanding and respect for their unique feminine bodies.

Happy 2017 & here’s to your most hormonally-balanced year yet!!!

UPDATE ON MY HEALTH

It’s been almost a year since my colonoscopy and all is well in my world. I don’t have Crohn’s, but I haven’t totally figure out the issue as yet. However, I had to get super strict with my diet for about 6 months and I felt A LOT better. I then chilled out a bit because summer came with all it’s beach barbecues and some travel. More than anything, I made it a point to focus on stress mitigation. Stress is not going anywhere anytime soon, so it has been my mission to reduce it’s effects on my body as much as possible. And it’s done me a world of good.