Is Your Birth Control The Cause Of Your Depression? 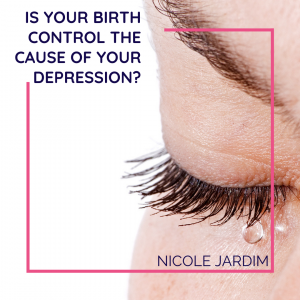 Birth control is in the news these days in a BIG way!

A newly released study from the University of Copenhagen confirmed the link between hormonal contraceptives and depression.

FINALLY!!! Confirmation (and vindication) for soooo many millions of women who have suffered birth control-induced mood problems and depression (myself included).

This isn’t some flimsy study either – it included ONE MILLION Danish women between the ages of 15-34 and was done over the course of 13 years.

The researchers found that women taking the combined birth control pill, (estrogen and progesterone), were 23% more likely to be diagnosed with depression and those using the progestin-only pill (also known as the mini pill) were 34% more likely.

This is because progesterone is a great calming/relaxing hormone when released by your body, but when there is too much, it totally messes with your mood.

What was striking to me was the effect oral contraceptives have on teens aged 15-19, who are more vulnerable because of their developing neuro-endocrine systems. The study found that they had an 80% increased risk of depression on the combined pill and it was double that with the mini pill!

Of course there’s more…with the patch, the risk of depression was double. With vaginal rings the risk increased by 60% and with the hormonal IUD (Mirena), there was a 40% increase.

And teens who used the non-oral forms of birth control I just mentioned have a 3-fold increased risk of depression.

Ultimately these are not huge numbers but they are solid, and we can’t continue to ignore them anymore.

Unfortunately, the initial comments and responses from doctors and other medical “experts” were nothing short of infuriating….

Here are a few gems from the medical experts

“Women shouldn’t be alarmed or concerned”

“Until further studies are done, women should not be deterred from taking the pill”

and my personal favorite –

“The study does not prove and does not claim that the pill plays any role in the development of depression.”

On the pill, no woman’s body is capable of functioning at its optimal level. The body has a delicate system of balance and each woman’s system is different, but the pill is a one-size-fits-all jam. Modern medicine’s biggest flaw if you ask me.

If you want to read up more on how hormonal contraceptives affect your physical and emotional health, then check out these popular blog posts. I include my #pillstory in the first one.

5 Things You Must Know About Hormonal Birth Control

Are Birth Control Side Effects Ruining Your Life

Get Off the Birth Control Pill the Right Way

0 thoughts on “Is Your Birth Control The Cause Of Your Depression?”