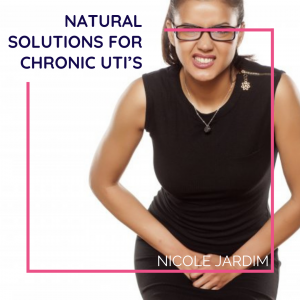 I remember it like it was yesterday – I was 21, in college and supposed to be having the time of my life partying and having lots of irresponsible sex. Haha! Instead, I was sitting in the ER because I had yet another urinary tract infection (UTI), and get this, was having an allergic reaction to the antibiotics I had been prescribed a day earlier. 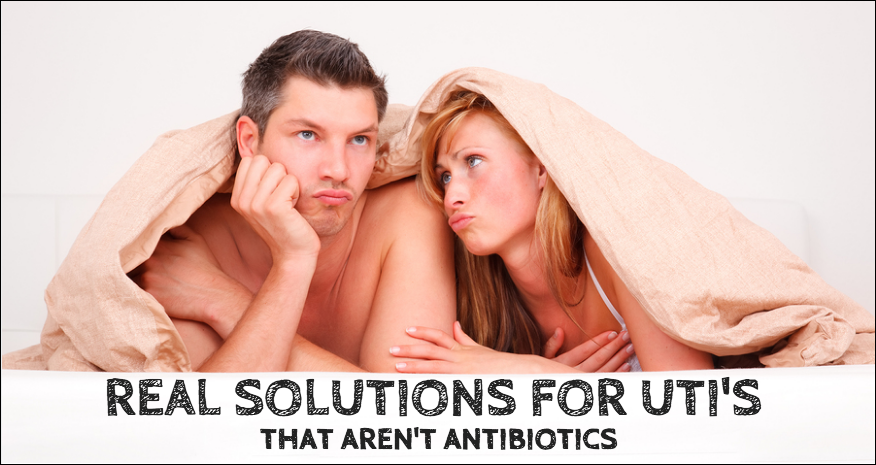 I was in a state – my entire body was bright red and itchy, and I felt like I was going to pass out because I was having trouble breathing. Not a good look.

When the ordeal was over, I vowed that I would do whatever it took to never get another UTI again! Obviously, I was acutely aware of the problem, but I wasn’t informed enough about the actual solutions outside of the “conventional round after round of antibiotics” approach or the “drink a sh*t ton of cranberry juice” approach.

So, naturally I did some digging. As afflicted people tend to do.

And I found out A LOT!

But before I get into that, I want to talk about what UTI’s are and how they come to be.

What is a UTI?

A UTI is basically an infection that occurs anywhere along the urinary tract, including the bladder and kidneys. Unfortunately they occur more often in women because we have a shorter urethra than men, which means it’s easier for bacteria to travel to the bladder.

What are the main causes of UTI’s?

For any of you reading this who have had a UTI, I know you’d do anything to avoid getting another one!

What are the main treatments for a UTI?

Sadly, the most common treatment for UTI’s is antibiotics. They are nothing more than a short-term quick fix, and oftentimes, you’ll have another infection within six months (or sooner), because they don’t treat the actual cause of the UTI. If you’ve been taking round after round of antibiotics for your UTI’s, I suggest you stop! They are doing way more harm than good.

How to cure your UTI naturally!

Uqora is a relatively new company but already women are swearing by them.  I have friends who have had chronic UTIs for most of their lives who have seen them completely disappear after using Uqora.

Since UTIs are caused by bad bacteria growing in the urinary tract, Uqora’s products have a 3-pronged approach to dealing with this.  First, they flush out new bacteria introduced to the urinary tract (Target).  Second, they break up old bacteria that may be hiding from a previous infection (Control).  And third, they support the good bacteria in the vaginal microbiome that naturally protect from UTIs (Promote).

Uqora uses only ingredients found in nature. No medications, no antibiotics—just simple, effective prevention and they have quickly become the leaders in natural UTI protection.

The first solution I found when I was suffering from chronic UTIs that sounded promising was D-Mannose. Well, actually I found a product called UT Vibrance, which has D-Mannose in it.

This stuff was like the magical cure I’d been searching for all my life for my chronic UTI’s. A total game changer!

D-Mannose is considered to be the most effective supplement for preventing and treating UTI’s when they come on.

[1] Yup, not cranberry as we’ve been made to believe. D-Mannose is a naturally occurring sugar that is found in fruits like cranberry and blueberry, and that’s why cranberry juice and capsules are often suggested for the treatment of UTI’s.

What’s great about D-Mannose is it’s absorbed by your body slowly, so it won’t interfere with your blood sugar, even if you’re diabetic or have insulin dysregulation. And, even in high amounts it doesn’t cause any adverse side effects.

How does D-Mannose work?

Most UTI’s are caused by E. Coli bacteria. D-Mannose works by attaching to the E. Coli, which causes them to stick to each other and prevents them from sticking to the walls of the urinary tract. [2] Think of it like a lint roller for the bacteria in your urinary tract!

In addition to taking it when you have a UTI, you can also take it when you feel you are most prone to getting UTI’s – like when you are taking antibiotics or having lots of sex (the latter being the preferable scenario!)

How to take D-Mannose:

Other natural solutions for UTI’s:

Here’s something you should know – D-Mannose doesn’t work for everyone because it is only effective against E. Coli bacteria, which accounts for 90% of UTI’s.

My dear friend who inspired this post is actually part of the remaining 10%. D-Mannose didn’t totally work for her because her chronic UTI’s were likely linked to another type of bacteria and/or what is known as a biofilm. We’ll get to that in a moment.

Lauricidin contains monolaurin, which is a medium chain fatty acid derived from coconut oil that is anti-viral, anti-fungal and antibacterial. Monolaurin is actually found in breast milk, and it provides immune support to babies.

Unlike antibiotics, it specifically targets pathogenic bacteria so it won’t mess with beneficial bacteria, which is a major deal. Lauricidin will disrupt the cell membranes of these gram positive bacteria, which blocks their ability to replicate, so the immune system can get in there and destroy them. [3]

According to the label instructions, simply place the mini-pellets in your mouth and swallow with cool liquid. Intake levels vary from 1/4 tsp. to one full tsp. two to three times a day with food. You can purchase Lauricidin here and you can learn more about it here.

A biofilm is an accumulation of various species of bacteria along the surface of the urinary tract and bladder, that has the ability to survive even in unfavorable conditions. When I think of it, I picture a basketweave pattern that is strong and unbreakable.

Not only does this seemingly impenetrable wall of bacteria make it difficult to treat UTI’s, it also makes them come back over and over again because the biofilm does not go down easy. I know, every woman’s worst nightmare.

How to get rid of biofilms

There is a solution to biofilm growth known as a biofilm disruptor.

How does a biofilm disruptor work?

A biofilm disruptor is exactly as it sounds. It contains enzymes that break down and dislodge the complex structure of the biofilm, thus improving the chances of getting rid of the UTI once and for all, and reducing their recurrence. I think of those ads for Dawn dish soap where it literally breaks through a wall of grease. HA!

I recommend Klaire Labs Interfase Plus, which you can buy here. You should follow the dosage instructions on the label. You can read more about this amazing product here. You can also check out Biofilm Defense as an alternative to Interfase Plus.

You should use either the Interfase Plus or the Biofilm Defense in conjunction with D-Mannose or Lauricidin, to really knock the infection out.

PrevPreviousIs Your Birth Control The Cause Of Your Depression?
NextEverything you ever wanted to know about heavy periodsNext