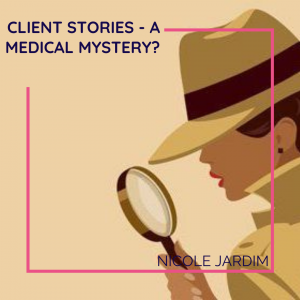 This is the second post in a series of Client Stories.  This story is by Dori W., and she shares her journey from medical mystery to vibrant health and getting pregnant naturally. Enjoy!

I’ve spent most of my life being a medical mystery.  I remember half-joking with one of my new friends at college that whenever I went to the doctor, they either didn’t know what was wrong with me or told me I might have something horrific when it turned out to be not that big a deal.  I said this as I was off to a doctor’s appointment, where I was told I might have leukemia, but it turned out to be mono.  Like I said, half-joking.

I started having issues with my health about the same time I hit puberty.  In seventh grade, I passed out twice after skipping breakfast (yes, it took me twice to learn to eat breakfast), which was the start of a long battle with my blood sugar levels.  Not long after, I started having gut-wrenching, incapacitating menstrual cramps that made me throw up from the pain.  I actually remember contemplating if it might hurt less if I cut everything out, it hurt so bad.  At age 14, I was put on the pill to help with the cramps.  I then started having issues with sun poisoning, where being out in the sun would cause me to break out in a rash.  Over a couple more years, I only got more sensitive.  Not even clothing was enough to protect me, and even just going out to get the mail left me broken out in hives.  So I had to start my day with a full body covering of sunscreen before I got dressed.  Finally, I went to the doctor.  After being looked at like I was an alien after showing them my hives from just driving to the office, they consulted a visiting doctor.  Luckily (for me), his wife had experienced the same thing only while she was pregnant, so that was their clue that it was a hormonal thing.  They changed my birth control prescription to a mini-pill, and it got much better.

Throughout high school and college, I was one stressed out lady.  In high school, my overachieving self had overcommitted herself to the point of actually getting panic attacks when I realized how much I had to do.  This, as you might imagine, took a further toll on my health.  There was a period when, like clockwork, I would be at the doctor’s office every three months with some new, totally bizarre symptom.  At one point, I lost 15 pounds in two weeks while having to eat every hour to keep myself from getting dizzy.  I was drinking those 2,000 calorie shakes to try to keep my weight up.  It turned out I was hyperthyroid, and it finally started to click that all this stress was bad for me.  I consciously started to work on stress management.  In college, I no longer was having panic attacks, but I was still pretty high strung and all over the place.  My senior year, I carted myself into the doctor’s office yet again after “not having time” for weeks.  I had bronchitis so bad by that point, I was down to 13% lung capacity!  It took me five months to recover from it, and it gave me mild asthma.  This was really a wakeup call for me; I needed to prioritize my health over all of my other commitments.

The medical mysteries continued but at a much less frequent pace as I started prioritizing my health more, and with each health crisis, I continued to learn valuable lessons.  A couple years ago, I had a severe allergic reaction to the flu shot, despite having had several during the previous years with no incident.  It was described as a chemical burn from the inside out.  I shed not only several layers of skin, but also the linings of my organs.  I had reduced work hours for five months.  But the good that came out of such a horrible experience?  Out of necessity, this uber-independent woman learned to ask for and accept help.

The first big step I made toward taking charge of my own health was a candida cleanse.  Candida, a yeast overgrowth, was something that kept popping up as a possible underlying cause for seemingly unrelated problems I was researching.  I didn’t want to go to the doctor, tell him I thought I had this, and get looked at like I was crazy yet again.  I had found a two-week cleansing diet, so I figured what the heck?  I’ll just try it for two weeks and see what happens.  It was life-changing.  I no longer was blacking out from low blood sugar.  I had to redefine what hungry felt like.  For example, I realized I had associated sweating with low blood sugar and would immediately grab for something to eat, and it took some reprogramming to realize that now it’s more likely that I’m just hot.

The next big move I made toward my health was switching to a “real food” diet.  I know, the name is stupid, but it’s basically trying to eat foods like they were before industrialization.  This basically means eating for nutrition and not convenience, and my body is definitely appreciating the extra nutrients as well as taking more care with my gut flora.

In the midst of this journey, I met and married a man who no one would debate is my soulmate.  We fit so well together, we’ve had people assume we must be brother and sister.  We decided we wanted to have a child together.  Now, by this point, I had been on birth control for nearly twenty years.  I thought I could just get off of it and boom! get pregnant.  Let me tell you – it doesn’t work that way.  First, I had very unpleasant withdrawal symptoms, and then…nothing happened.  With each passing month with no results, I got more serious about taking charge of the situation.  I started to realize that I had done so much research on health and nutrition but was embarrassingly ignorant about how the female hormones and parts actually worked, at least in the reproductive sense.

This is where Nicole came in.  She gave me so much of an education on how my body works and how to get things to be the finely tuned masterpiece they’re supposed to be.  She lays out the information for you, tells you what works for most women, but still encourages personal experimentation that really appeals to my scientist side.  The information I got from her class kicked my health up to the next level, and I don’t think it’s any coincidence that the cycle I started while in her class was the one in which I conceived my sweet baby girl.  I am so thankful for the winding, difficult paths that brought Nicole to do what she does and me to be able to accept her help.  Thanks, Nicole!

Would you like to share your period story and inspire other women to heal naturally? If so, get in touch: support@nicolejardim.com