Why I went to the movies alone on Valentine’s Day

“You are such a perfect little arrangement of atoms.”  –unknown

Seriously, you are. Know it and own it.

Friday February 14th 2014 was the first Valentine’s Day in a very long time that I was not feeling sad, kind of alone and somewhat sorry for myself. It’s also the first time I haven’t had an overwhelming desire for flowers, chocolates and just general loving up. I know that my best friend would say Valentines is just a ridiculous, made-up “holiday” but for many people it is a glaring reminder of their single-ness.

Not for me though, this year it was all about becoming my own Valentine.

Instead of hoping for my white knight to swoop in, I made an all-day date with myself. Lucky for me, I’ve got good friends who invite me to very cool love fests like Eve Ensler’s V-Day/1 Billion Rising event in NYC, where I got to experience 8 hours of some of the most remarkable women on the planet – Eve Ensler, Dr. Christiane Northrup, Danielle LaPorte, Gabrielle Bernstein, Meggan Watterson and others – what more could a girl ask for on V-Day? 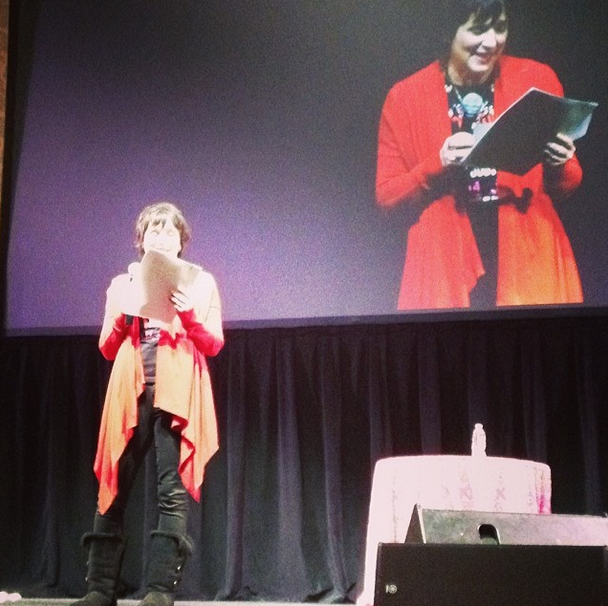 If you didn’t know, Eve Ensler is the creator of the Vagina Monologues, a play about, yup you guessed it, the power of vaginas. If you have not seen it, then I insist that you run (not walk) to the nearest production of this masterpiece.

She is also the genius behind V-Day and 1 Billion Rising, a global movement to wake the world up to the horror of violence and injustice that women and girls endure on a daily basis. And wake me up she did.

In her closing speech, she told her story of growing up not too far from New York City in a wealthy suburb where on the outside everything was perfect. However, behind closed doors she was living in complete hell, a situation so unimaginable she had to mentally and emotionally vacate her body so she could survive the physical and sexual abuse. Although Eve’s personal journey is heart-wrenching, she said it pales in comparison to what happens to millions of women all over the world every day.

Then with tears in her eyes, she spoke about Jane, a woman she met in the Congo in 2007. She said, “Jane is the reason that I get up every day.” I’d say that’s pretty powerful coming from Eve Ensler.

A little backstory: The Democratic Republic of the Congo, particularly the eastern region of the country, has been dubbed “the most dangerous place to be a woman” and “the rape capital of the world.” It is estimated that 1000 women are raped every day and some say those numbers don’t come close to the reality. I get chills just thinking about what life must look like for women in that country.

Jane’s story is particularly heinous. In 2005, she was taken from her home by the militia and tied to a tree – for two months. TWO MONTHS! She was violently raped every single day before she was rescued. Her body was so broken that she almost didn’t survive the journey to the hospital. When Eve met her, Jane was in the hospital recovering from the nine operations it took to physically put her back together.

You can read Jane’s full story on the One Billion Rising site.

Eve asked her how she could help and Jane said all she needed was a place where women could come to feel safe and to heal from atrocities committed against them. If this space existed, then Jane could help empower other women who’s lives had been destroyed by unspeakable acts of sexual violence. Such a shining example of how to turn personal pain into power.

My pre-occupation with flowers and chocolates suddenly seemed so gross and ridiculous. I looked at my friends and we were all crying. I felt embarrassed and ashamed by my absurd first world problems. Everything is relative but perspective is everything.

This event was a gentle reminder to recognize (yet again) that what we desperately need is a massive shift in consciousness and behavior across the planet. And that some serious gratitude for my life was in order.

Get involved in the movement: www.onebillionrising.org

That was my unbelievably awesome day date with myself which I topped off with a movie. If you know me, you know that I’m not the girl who goes to the movies (or anywhere for that matter) alone because I don’t think I can act cool enough! Haha! Well that changed on Friday night and it was totally liberating. I’ve now got a recurring monthly date with ME on the calendar!

Whether you have a Valentine or not, creating a relationship with yourself should be a top priority. Because no one on this planet will care more about you than YOU.

Here are some of the practices that have heightened my own self-love and comfortable-ness (is that a word?) with myself:

“Love and hate are the same beasts, what you feed is what grows.”  Tweet that!

1. Surround yourself with people who love and adore you. We tend to be blind to our own greatness, so let others help you see what you aren’t seeing. Don’t focus on the people who can’t love you, they need to learn to love themselves first.

2. Be honest with yourself about your feelings. Remember, Facebook statuses are not an an accurate reflection of what people’s lives actually look like. We ALL have bad days and tough times – if you’re going through a rough patch don’t pretend to feel good if you don’t. Instead, talk it out with friends or simply to yourself – in the mirror 🙂 And feel it…there is nothing more toxic than pent-up negative emotion.

4. Make a list of 5 things that you think are fun. Get crazy and do at least one a week! Don’t worry about what anyone else would think. Just know how AMAZING it feels when you’re doing something for you! Here are mine: Hanging with girlfriends (I’d die without them!), long chilled-out walks, dance classes (Zumba anyone?), binge-watching juicy TV shows, anything creative (cooking classes, vision board classes…you get the idea).

5. Get uncomfortable so you can get comfortable with yourself. There are soooo many distractions  nowadays. Unfortunately, they are all just a mechanism to avoid feelings we don’t want to feel. The next time you reach for your phone, that piece of cake, or get lost on Facebook – STOP yourself and ask “What’s behind this? Am I avoiding/disconnecting from something I don’t want to deal with?”

Here’s the last word on being your own fabulous Valentine: I want you to become as beautiful and happy and irresistible as you can possibly be. The more you tap into this divine self-love energy, the better the world becomes for you and for everyone around you. So don’t spend another minute pining for what you don’t have, because you truly lack for nothing. It’s all inside you ready to be dished out to the world and LOVED!!!