Thermography: an alternative to mammograms 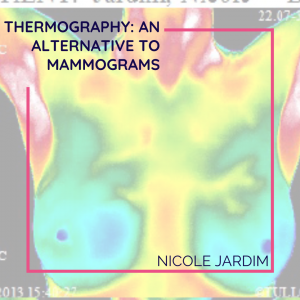 Thermography, also known as thermal imaging. Last month I had my first thermography session and it was a fascinating experience. Well I thought it was!

If you are unfamiliar with thermography, here’s the lowdown according to the Thermography for Health’s website (this is where I had my session):

“Thermography uses special infrared-sensitive cameras to digitally record images of the variations in surface temperature of the human body. It’s basically a specialized HDTV night vision camera used to record images of the heat patterns of the breast. The recorded images are called thermograms.

Thermography is an unsurpassed, safe and noninvasive breast cancer screening technique that can detect signs of cancer up to ten years earlier than is possible using mammography. Breast thermography is approved by the FDA for breast cancer risk assessment. The exam takes only a few minutes, and there is no touching or compression of the breast whatsoever.”

Thermography is typically used to detect breast abnormalities or breast cancer, however, I was not so concerned with my boobs as I was with my groin. I know, lovely right? I have a couple of lymph nodes in my groin area that seem to occasionally swell up for no apparent reason.

While I know there is an underlying cause, I haven’t quite been able to pinpoint it. This has been a source of major anxiety over the last two years and much to my chagrin, everything I’ve tried has failed to permanently address the matter. 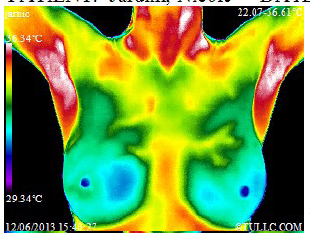 If you know me, you know that I love experimenting on myself. I’m my own guinea pig. For this particular issue I’ve tried all sorts of things –  lots of acupuncture, dry brushing, lymphatic drainage massage (I only did this once so perhaps I need to revisit it?), essential oils, supplements etc. I even tried a product called Keeping Abreast Of It (I kid you not) which is supposed to encourage lymphatic circulation. This product was energized with reiki no less, and still….NO IMPROVEMENT!

I’ll try anything new so if you have any ideas, please feel free to leave a comment. #grateful 🙂

Anyway, I digress. Back to thermography. In addition to breast cancer, it can detect a whole host of things – fibromyalgia, heart disease, back problems like scoliosis, any kind of nerve problem, carpal tunnel syndrome, skin cancer, other unexplained pain and tons more. You can see the full list here.

DISCLAIMER: Before I dive into this I want to say that you should 10000% do your own research on thermography and of course make decisions about your health under the guidance of a trained medical professional. This includes a decision on whether to have a mammogram, thermography or both.

Okay, so here’s what is really incredible about thermography: “It’s successfully used throughout the world to detect signs of breast cancer up to 10 years before the cancer is detectable using mammography – without the intense pain, errors, and exposure to harmful radiation.” 10 years people!!! 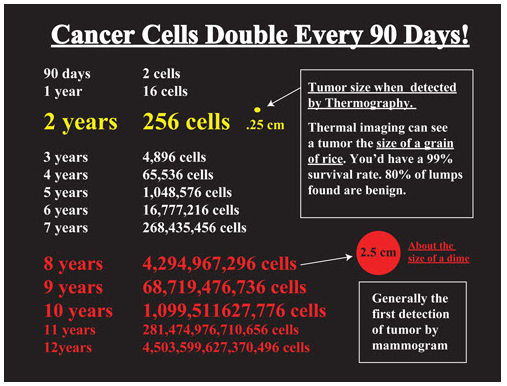 ^^^^Are you seeing this??? Thermography can find something that is the size of a rice grain! Mammograms don’t even come close!

Here’s what I have learned in my research. Again, please do your own research.

Thermography is exceptional in detecting breast cancer within the first year of development, as well as detecting and recording more advanced stages of breast malignancy. Thermography is different than other invasive techniques, such as mammography and x-ray that penetrate the body with harmful radiation, because thermography is non-invasive and radiation free. Most other diagnostic equipment detects anatomical issues, but thermography investigates physiological patterns.

Here is a breakdown of why thermography could be better at detecting breast abnormalities than mammography. It might be a little controversial for some people who’ve been led to believe that mammograms are the only way to detect breast cancer but I love a little “alternative health” controversy! The part in which they discuss how thermography has been suppressed by the conventional medical industry is especially juicy.

The day of my session I was given a 2-page list of instructions on what I should and shouldn’t do prior to the scan.

No showering, shaving, lotions or deodorants on the day of, and no hot liquids or caffeine two hours before the test. Basically don’t do anything that will alter your body chemistry or trigger a nervous system response. This allows the practitioner to see exactly what is going on and establish your baseline thermographic image.

Basically the practitioner had me strip and put on a gown. The room temperature has to be at a controlled 60 degrees Fahrenheit or 15 degrees Celsius (kind of cold if you’re naked),  in order for the infrared imaging to be effective.

Depending on which body part you are having tested, the practitioner will ask you to sit and stand in various positions so that each area can be photographed thoroughly. I’d love to show you the image of my groin area but that might be a little too much, yes? 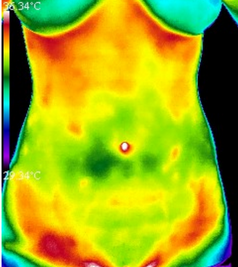 ^^^^Here’s a PG version – not so much cooch on display in this groin pic. But as you can see there is lots of heat/inflammation in my nether-regions.

Here are some other shots to give you an idea of what this all looks like…unfortunately my neck and back were a little jacked up too. Eeeeks. 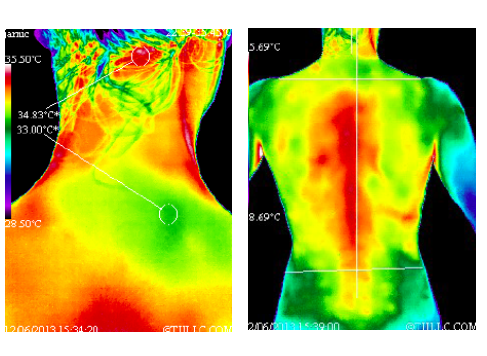 After my session, the completed scans were sent over to a doctor for review. My report arrived a week later full of notes and observations about what all the red and pink actually meant.

It turns out that I may have been a little jacked up, but luckily there was nothing indicating abnormal cells. Weee! Instead, I was given a list of recommendations to get my lymphatic system moving and flowing properly and to correct my crooked back!

This whole experience has shown me that my nervous system switches into “alarm” mode way too easily when I’ve got a lot going on in my life, but it has much more difficulty switching gears and taking it down a notch. SO much of what showed up on my scan was a nervous system in over-drive and it ultimately boils down to re-training my stress response. I guess I should practice what I preach huh? 🙂

If you’ve been told to have a mammogram (radiation, ick) or there is breast cancer risk in your family, I urge you to also consider thermography. Or perhaps you’ve got another issue going on (like me) and you wanna check it out. While I don’t believe in operating from a place of fear, I do believe in being proactive about your health. And this is a great place to start!

0 thoughts on “Thermography: an alternative to mammograms”

PrevPreviousWhat’s a normal menstrual cycle look like?
NextBone broth – the most fertile food?Next