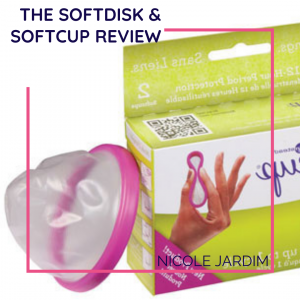 This month I am continuing my adventure into the world of alternative products for period protection. My last blog post in this series was about the Diva Cup, and you can read about it here. It was quite the learning experience! In fact, I was having a conversation with my cousin the other day about the trials and tribulations of the Diva Cup and she said the first time she used it she was sure she’d have to go to the emergency room to have it removed! I almost died laughing! But I digress…onto the Softcup (now called Softdisk). 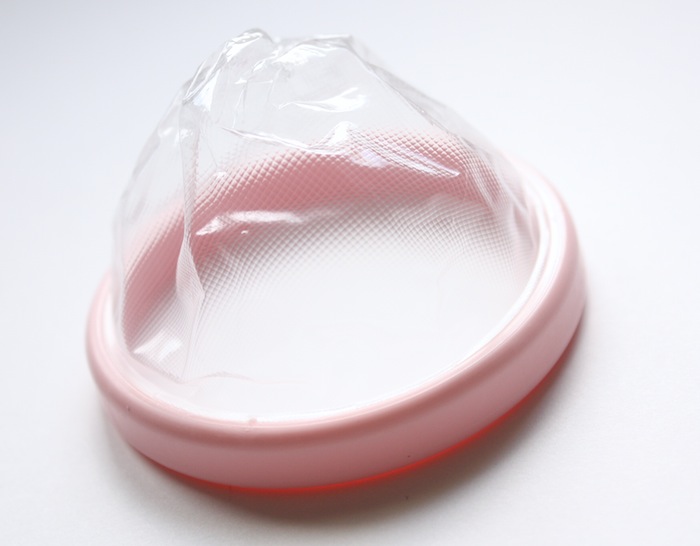 What is The Softcup?

The Softcup is somewhat similar to the Diva Cup and looks kind of like a diaphragm. It is disposable and you’ve got two options, 1) the original Instead Softcup is used for 12 hours and then thrown away or 2) the newest version the Reusable Softcup that you use for your entire cycle and then throw away. I find it to be A LOT easier to use than the Diva Cup but not as financially or environmentally friendly. At the same time, it has a smaller footprint on the earth, our health and on our wallets than tampons and pads. A Diva Cup costs about 40 bucks, a box of 14 one-use Instead Softcups costs about $17.50 while a box of tampons typically costs $4.99-6.99.

The health aspect of menstrual cups is obviously very appealing to me. Tampons and pads are made with some really scary ingredients. Do you really want to expose your delicate lady parts to these products every month for years on end? No, I don’t think so. The Softcup has zero absorbency which means zero risk of Toxic Shock Syndrome (TSS) and it’s made of hypo-allergenic, latex-free, non-toxic material – the same material used for catheters and baby bottle nipples.

How long does the Softcup last?

One Softcup is supposed to last for 12 hours, much longer than the average pad or tampon. This is a major perk for women who are constantly on the go. And isn’t that practically everyone?

Can you have sex while using the Softcup?

Biggest Bonus: The Softcup loves to make love. Yup, you can have sex while using the Softcup and neither you or your partner will feel it. Less messy period sex? I’ll let my readers be the judge of that one! 🙂 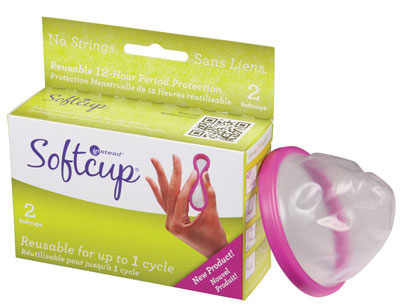 *This next bit is for the ladies only*

I was a little concerned because I have never used anything like the Soft Cup before, and wasn’t sure how it was all going to go down. Of course my biggest question was: Will it work? Keep reading to find out…

How do you insert a Softcup?

Basically one should sit (preferably on the toilet), squeeze the rim together and push the Softcup down and towards the back so that it sits under the cervix. Pretty much the same as a diaphragm, except it has a slightly different purpose – Ha! It should be pushed back until it can’t go anymore, that way you’ll know that it’s in the right spot!

Do not push the Softcup upward as it will stop in front of the cervix. This is not the correct position for the Softcup and can cause leakage. If that happens, just pull it out and then reinsert pushing downward and back. Inside your body, the Softcup molds itself immediately to your unique internal shape, forming a personal fit that ensures comfort and helps prevent leakage.

When the Softcup is inserted properly, you shouldn’t feel it. The Softcup fits exactly in the natural space just below the cervix. If you feel something in the vaginal canal (like a tampon can feel), the Softcup is probably not far enough inside you. Just remove and try again. I recommend starting on one of your lighter days. Just as when you first started using tampons it took some time to get used to, Softcup takes some time to adjust to.

I followed the detailed instruction leaflet in the box and on my first two attempts there was a leakage situation within 2-3 hours (think that was my fault!). But the third time was gold – it lasted for 10 hours! Wooohooo! I was so excited, especially since I was such a fail at the Diva Cup 🙂 I have since used the Softcup again and for sure I’ve found my new favorite period product!

Where can you buy the Softcup?

You can buy the Softcup at Amazon.

Ever tried the Softcup before? Or any other cup? Had any good/bad/crazy experiences you want to share? Oh I know you do! 🙂

0 thoughts on “The Softdisk & Softcup Review”