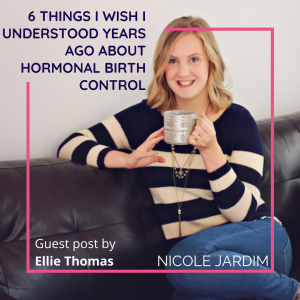 Written by my Spring 2017 apprentice, Ellie Thomas, this post discusses how the pill wreaks havoc on your hormones!

The pill and me, we aren’t exactly BFF’s. There was a time in my life however, where I thought taking the pill and hormonal birth control seemed so grown-up, cool, and posh. Everything I wanted to be.

You see, I grew up in a home where we used homeopathy instead of over-the-counter cold and flu remedies. Cough syrups and decongestants weren’t a common resource, let alone the Pill as a contraceptive or “cure” for my monthly cramps. While I never completely dismissed these ideas, the lure of everything mature and sophisticated overpowered my desire to follow my family’s more natural tendencies when I went to college.

I used the Nuvaring for a year.

It felt easy and at the time I didn’t consider it could have side effects, however I was constantly exhausted during my first year of college. I often slept for 12-15 hours only to wake up feeling equally exhausted as I had felt the night before.

I took a break from birth control and regained my normal sleeping habits only to try an oral contraceptive a few years later. This time I asked for Yaz.

Again, just a few months of use led to feelings of weakness and exhaustion, and I was constantly experiencing breakthrough bleeding. Looking back, I was walking around like a zombie half of the month, plus I was having constant digestive distress, UTI’s, I rarely had energy or stamina to exercise, and I secretly wanted to sleep my early 20’s away!

It has been four years since I ditched hormonal birth control (forever!). Through my hormonal health escapades and nutrition studies, there are 6 defining points I now understand that I wish someone had explained to me 10 years ago!

The pill and other hormonal birth control can create a kind of blanket effect, overriding our body’s natural production of hormones over time, or throwing off the natural ratios of estrogen, progesterone, and androgens in the body. As long as we have synthetic hormones coming in through a pill, patch, implant, ring, etc. testing our hormones in hopes of evaluating or detecting imbalances won’t provide true insight as to what might be causing disheartening symptoms.

The same goes for women who have previously been diagnosed with PCOS, for example; as long as we are using hormonal birth control, it is very hard to know if any efforts to rebalance hormones have actually shifted the levels and ratios of the hormones your body naturally is making.

Since hormonal birth control overpowers the body’s natural hormone production, the bleed we get while using it can be deceiving. This period isn’t caused by the natural ebb and flow of estrogen and progesterone in the body, rather the lack of estrogen the body is receiving during the timed placebo pills. Hormonal birth control can actually be masking a true imbalance internally that could be preventing a woman from being able to ovulate and menstruate.

#3 Hormonal birth control, especially in pill form, may drastically affect our gut flora over time, often leading to a gut imbalance such as Candida

While more research needs to be conducted on this, oral contraceptives are suspected to act as a constant antibiotic internally, slowly altering and killing off healthy gut bacteria. This in turn allows different pathogenic bacteria, such as Candida or other types of yeast, to overgrow and cause deep imbalance throughout the body. Common signs and symptoms of Candida may be UTI’s, yeast infections, acne and skin rashes such as eczema, weight gain, constant sugar cravings, nutrient deficiencies, and brain fog. Candida overgrowth is likely one of the reasons I had such chronic UTI’s while on the pill.

Even if we start the pill with a healthy cycle, years on the pill can cause or exacerbate deficiencies in B vitamins, vitamin C, and minerals such as zinc, selenium, and magnesium. Such deficiencies can lead to immune dysfunction, hormone imbalance, and a host of other issues down the line.

I often speak with women with PCOS, PMDD, PMS, cramps, and acne, and they express feeling like the pill is their only option. In my eyes, the pill is more of a Band-Aid than a cure. However, the good news is that diet and lifestyle shifts, along with gut healing and blood sugar balance can be hugely helpful for a woman’s hormones, wellbeing, and overall long-term health! If you are feeling out of options, I definitely encourage you to seek out a practitioner who is willing to support your body with a healthy diet and lifestyle, and help you identify the root cause of your issues.

#6 Many women aren’t able to get pregnant immediately after stopping hormonal birth control; it may take a few months to get back on track!

I also see and hear this a lot from women; they expect the second they get off hormonal birth control they’ll be ready for baby. For some women this might be the case, but my hunch would be there are more and more women with delayed periods and irregular cycles these days after being on the pill for a number of years. After years on the pill, the body might just need a few months to start generating its own hormones again. You can help it along by tuning into your gut health, possible nutrient deficiencies or imbalances, reducing stress, and focusing on nourishing fats, proteins, and vegetables.

My hope is that sharing this information doesn’t scare anyone, but rather can be used as an aid to further explore your body and what the best birth control option is for you! Feel free to share about your experience with different birth control methods in the comments!

After years of interest and devotion to healthy living and using nutrition to prevent disease, Ellie returned to school to become a holistic nutrition consultant. Ellie is currently growing her practice, where she passionately accompanies women as they begin to understand their bodies on a deeper level, discovering what foods and habits aid each woman’s individual body to function and feel the best. Ellie loves chatting and teaching about the female cycle and how nutrition contributes to hormonal balance and fertility. Connect with Ellie on her website and follow Ellie on Facebook and Instagram!

PrevPreviousWhy Stress May Be Preventing You From Getting Pregnant — And What You Can Do About It!
Next5 tips to knowing and trusting your bodyNext