Cholesterol is great for hormones! 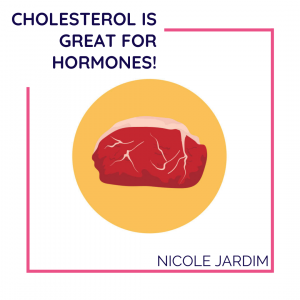 This post was inspired by one of my private clients. She works in pharmaceutical sales and mentioned on our last call that the leading heart organizations in the US recently changed their guidelines on cholesterol-lowering drugs. I was unaware of this latest development in the “fight” against high cholesterol so I decided to do a little digging.

Here’s what most people know about cholesterol…it goes something like this: “My doctor said my cholesterol is too high and I may need to go on drugs to lower it.”  If that hasn’t happened to you I’m sure you know someone who’s heard those words. Not surprising, as 36 million Americans are on cholesterol-lowering drugs (statins) and the new guidelines would double that figure to roughly 70 million people. I think there is something awfully wrong with that picture. How could such a large swath of the population be so broken? 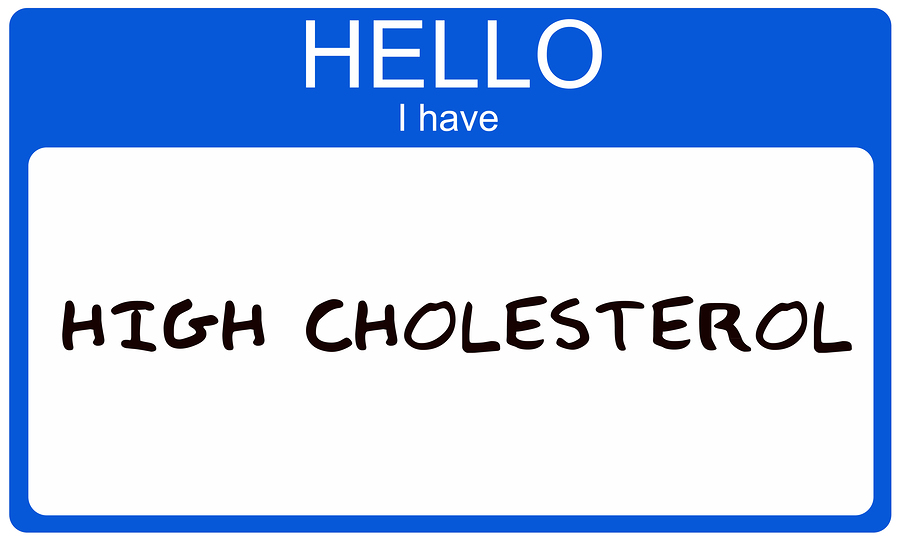 Did you know that 25 years ago, the normal cholesterol range was 150-310 mg/dl. Today, if your total cholesterol (LDL and HDL) is over 200mg/dl, you’re in the danger zone and will be told to go on a cholesterol-lowering drug. It seems every year, the drug companies keep trying to lower the recommended total cholesterol and LDL cholesterol numbers so they can get more patients. At some point, everybody would be advised to be on a statin, which of course is ridiculous.

I’ve never really worried about my cholesterol because it was always super low – think 105mg/dl TOTAL. Keep reading before you start hating me ;-). My doctor once said to me with absolute certainty, “You will never have a heart attack Nicole.” Ha! If it was only that simple doc.

What does cholesterol do?

This is how I like to describe the role of cholesterol – think of your arteries and veins as a series of roads and highways. Over time potholes and other damage (inflammation) happens because of a crappy diet of mostly refined carbs, refined sugar, alcohol etc. Your body then releases cholesterol (the roadwork crew) to start patching the holes. The more damage you do, the more cholesterol you’ll produce to address said damage. Can you see why cholesterol isn’t inherently bad, and why cholesterol-lowering drugs aren’t the solution? They’re really just treating the symptoms of an underlying condition that’s causing the body to produce more cholesterol. Remove the causes of inflammation and oxidation and you lower cholesterol.

Here’s what you need to know:

1. Cholesterol is not bad for you. Eeeks, I said it!

FACT: Many alternative practitioners and followers of a more paleo-centered diet are well aware by now that dietary cholesterol does not significantly affect cholesterol levels in the blood or risk for heart disease, and that there is no longer any reason to avoid whole foods with naturally high levels of cholesterol.

Here’s an excerpt from an article written by Chris Kresser on why cholesterol levels are not affected by fat and cholesterol-rich foods:

This basically means that cholesterol in food won’t give you a heart attack. So you can ditch the egg-white omelettes and start eating egg yolks again. This is especially important because all 13 essential nutrients found in eggs are in their yolks!

Cholesterol is where MANY hormones come from – it is converted by the body into the “mother hormone” Pregnenolone, which then converts into numerous hormones including DHEA, progesterone, testosterone, the estrogens, and cortisol. Cholesterol is also a precursor to vitamin D. Kind of a big deal. If we don’t have enough cholesterol and pregnenolone, it is safe to say that the cascade of steroid hormone production in our bodies would be compromised. 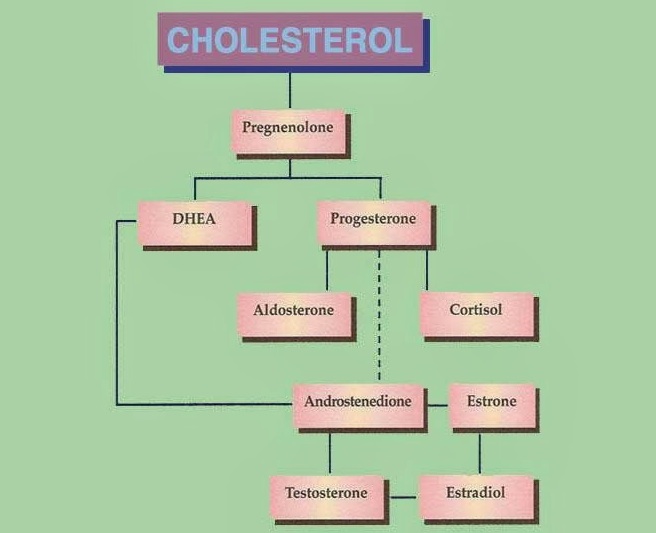 My traditionally low levels of cholesterol might explain my tendency towards lower levels of estrogen, progesterone, testosterone and vitamin D. This is purely anecdotal, but increasing my fat and cholesterol intake over the last three years has significantly improved my hormone levels and my overall health. Has this been your experience too?

BTW, if you want to get your hormones tested, Lets Get Checked is my go-to provider for at-home hormone testing kits for myself and clients. You just order them online, have the kit shipped to you, then do the tests at home and send the kit back in the mail.

And after processing, their team of physicians will review your results and a member of the nursing team will call you to deliver the results and discuss treatment options.

The most popular testing kits include the Female Hormone Test, the Thyroid Antibody Test, the Iron Check and the Vitamin D Test.  Be sure to use discount code Hormones20 to get 20% off the price of all tests.

Choline is essential for women during pregnancy, as low choline intake is significantly associated with a higher risk of neural tube defects in a newborn. Symptoms of choline deficiency include fatigue, insomnia, memory problems and even infertility [3]. The best dietary sources of choline are liver and egg yolks, which are often avoided by many Americans due to fear of dietary fat and cholesterol.

It plays an essential role in your brain, which contains about 25 percent of the cholesterol in your body. It is critical for the formation of synapses – the connections between your neurons, which allow you to think, learn new things, and create memories. In fact, there’s reason to believe that low-fat diets and/or cholesterol-lowering drugs may cause or contribute to Alzheimer’s disease. Low cholesterol levels have also been linked to violent behavior [4], due to adverse changes in brain chemistry, particularly a reduction in serotonin activity.

There is a syndrome called Smith-Lemli-Opitz syndrome or SLOS. This causes a person to not make enough cholesterol on their own. If a fetus has the genes responsible for this syndrome, it almost always results in spontaneous abortion – meaning that cholesterol is needed to maintain life itself.

The idea is to use your intuition when it comes to your own cholesterol levels. My levels have gone up 35 points in the last three years and I feel MUCH better now than I did then. I eat more butter, coconut oil/butter, grass-fed beef and avocados than ever! Although my doctor told me I’d never die of a heart attack with cholesterol levels at 110, I’m willing to take my chances 🙂

0 thoughts on “Cholesterol is great for hormones!”

PrevPrevious5 Side Effects Of The Pill That No One Tells You About
NextWhat I learned from Dr. Sara GottfriedNext