Discover how to ditch your painful or heavy periods (for good) 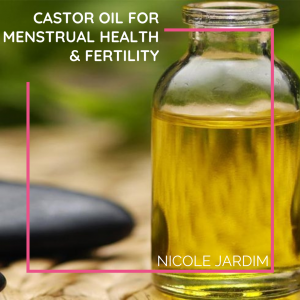 Click here to get my free Castor Oil Pack Guide.

I’m not sure what you think about when you hear the words “castor oil” but for me it brings up memories of my mom describing my birth. At the time, her doctor strongly recommended that she drink castor oil to help bring on labor and speed up the labor process.

So my poor mom drank a whole bunch of castor oil, promptly threw up and then labored for thirteen hours with me anyway. Sorry mom, I guess it doesn’t work for everyone huh?

Fast forward 35 years and here I am, a women’s health coach about to regale you with tales of the miracle-like benefits of this sticky stuff.

I first discovered it years ago during a Mayan Abdominal Massage (ATMAT) session. The practitioner slathered it on my abdomen and my parched skin (I have dry skin problems) soaked it right up! My period came a week later and it was perfect – it was four days long, not too heavy and pain free – naturally my curiosity was piqued.

What is castor oil?

Castor oil is derived from the seeds of the Castor Oil plant and has been used by many cultures for centuries to promote healing, specifically reproductive system healing.  In the past it was referred to as “Palma Christi” because it’s leaves were believed to resemble the Hands of Christ, able to perform healing miracles.

So how does castor oil perform all these miracles?  It has been shown to stimulate the three most important parts of the body in charge of removing waste and toxins: the lymphatic and circulatory systems, and the liver.

We’ll start with the lymphatic system as this is where this oil holds a very unique benefit.

How castor oil relieves congestion on the lymphatic super-highway

As is often the case with ancient medicines, castor oil was dismissed for many years by the modern scientific community as being mere folklore.  But more recent studies have even the most ardent critics becoming believers.

One study, focusing on castor oil’s effects on our lymphatic system, found a “significant” increase in the number of T-11 cells within patients after performing a castor oil treatment. As the study points out regarding this increase:

Lymphocytes are your immune system’s disease-fighters.  They travel along the hundred miles of your lymphatic highway removing waste from your tissue and transporting it to your blood so that it can be removed from your system.

This process is called lymphatic drainage.  When there is congestion in this system, waste and toxins build up causing inflammation and disease.

Castor oil has been proven to stimulate the lymphatic system, increase the number of T-11 cells, which reduces congestion allowing the traffic on this very important highway to flow freely.

This one attribute of castor oil is truly miraculous.  Our lymphatic system, unlike our circulatory system, does not have a heart to help it keep circulating.  Instead it relies on our bodies movements to keep things moving along.

A lack of consistent exercise and physical activity can cause the whole system to slow down leading to congestion and inflammation.  Boo!

The fact that a simple soothing castor oil treatment can immediately kick-start this very important disease fighting process is truly a gift from the goddesses.

Note: There are quite a few studies on castor oil, many of which are supposedly inconclusive. I want to make a point here that while that may be the case, the anecdotal evidence for the benefits of castor oil are quite profound and should not be dismissed. I have had tremendous results and so have many of my clients.

How castor oil helps with Detoxification

Now that your lymphatic system is flowing freely, removing waste and toxins from your tissue, castor oil moves on to stimulate the other detoxifying systems necessary to remove this stuff from your body.

It first provides a boost to your circulatory system to help increase blood flow to accommodate the removal of the waste being transferred by your T-cells to your bloodstream.

This bump in circulation produces new nutrient packed oxygenated blood which then travels throughout your body, to your reproductive organs, giving them a fresh army to help heal any damages and fight against any diseases. How perfect is that?!

The last step in this detoxification process happens in the liver.  The liver is the main detoxifying organ in the body.  Its job is to break down any externally-produced chemicals, as well as your body’s hormones, so that they can be easily removed from your system.

Basically, in a nutshell, castor oil is a detoxifying, inflammation-fighting, super-shero!  Our body’s systems for removing waste and toxins are amazing but they are also fragile and can easily become congested and out of sync, especially if we are not eating well and taking care of ourselves.

Castor oil and its incredible properties can help us get these systems flowing freely and get back in tune with one another allowing our body to begin to heal itself again.  Now I can see why they called it the Hand of Christ! 🙂

How To Make Castor Oil Packs

A castor oil pack sounds fancier than it is, I promise! It’s a topical application of castor oil to your abdomen with a piece of flannel or cloth placed on top, and then a hot water bottle or heating pad on top of that. A few times a week on non-menstruating weeks only, and voila! You’ve got an economical, efficient and effective way of benefiting from this incredible oil.⁣

Here to make it even more streamlined for you to implement a castor oil routine is Queen Of The Thrones.

The Queen of Thrones Liver Kit has been my go-to lately, because it’s so easy to use and their castor oil is 100% Pure, Certified Organic Castor Oil. Cold-Pressed, Hexane-Free and bottled in amber glass.

Click here to get my FREE guide on how to make and use castor oil packs.

And if you want a deep dive into this incredible oil, check out the book, The Oil that Heals by William McGarey, a doctor who has used castor oil to successfully treat many conditions including arthritis, cancer, digestive disorders, liver and gallbladder problems.

WARNING: I know, I know there are always precautions to take. I recommend consulting with a naturopath or doctor to make sure this is a good remedy for you. You should not use castor oil packs while on your period, during pregnancy or breastfeeding. If you are trying to conceive, don’t use castor oil packs after ovulation.

PrevPreviousPerfectionism: How it is Slowly Killing You
NextWhy Modern Women Need to Rethink StressNext