Put down the Z-Pak! The effect of antibiotics on your period. 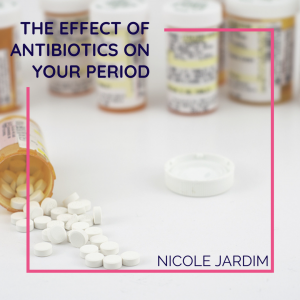 Can antibiotics affect your period?

When antibiotics are prescribed and taken, they can have an impact on your menstrual cycle, even if they were not prescribed specifically for an infection of the reproductive system. i.e urinary tract infections, bacterial infections and some yeast infections.

Antibiotics can affect your menstrual cycle in two ways:

It’s important to note that antibiotics appear to raise estrogen for some women, and lower it for others. This is what I’ve seen in my work with women. FYI, typically estrogen is broken down in the liver, then moved to the digestive tract, and released from the body through bowel movements. It’s also released in the urine.

Most antibiotics are metabolized by the liver, the same place that estrogen (and progesterone) are metabolized. Antibiotic use can speed up estrogen metabolization by the liver, which may reduce the available estrogen in the blood stream. This can be problematic especially if they are taken in the first half of the cycle as estrogen is building, in preparation for ovulation. If there is a lack of estrogen, this can cause either delayed ovulation or cause an anovulatory cycle (which is a cycle in which a woman does not ovulate).

When ovulation is delayed or it doesn’t happen at all, this will delay your period, or it may not come at all during that cycle.

This is the reason why you should always use a backup method of birth control if you take antibiotics while on the birth control pill. Basically, antibiotics speed up the excretion of the ethinyl estradiol (synthetic estrogen) in your pill, and as a result you may ovulate. There is also inconclusive evidence that antibiotics may affect progestin (the synthetic progesterone in some pills), which could also contribute to the risk of birth control failure while taking antibiotics.

So be safe and use backup birth control while taking these drugs, and for a week afterwards. Just my cautionary two cents! 🙂

Additionally, many antibiotics cause diarrhea which in turn increases excretion of estrogen from the body.

Effect #2: Antibiotics can disrupt the estrobolome

Antibiotics have an impact on gut bacteria – they will kill the opportunistic bacteria but unfortunately they’ll also take down the good ones too. More accurately, antibiotics disrupt the estrobolome, which is a specific group of microbes that determine how estrogen is utilized in the body.

In people with healthy microbiomes, the estrobolome bacteria easily break down the estrogen that the liver sends to the gut allowing the body to dispose of it. But when the estrobolome becomes compromised, the broken down estrogen metabolites can be turned back into active estrogens which are then reabsorbed into the blood stream, creating estrogen dominance.

The thing is, when estrogen levels change in the blood, it affects your pituitary gland function. The pituitary gland secretes FSH and LH (the hormones that stimulate your ovaries to build and release an egg) based on the level of estrogen in your blood. If your estrogen is too low or too high, your brain gets the wrong signal and doesn’t produce the right amounts of FSH and LH. This misfiring will totally mess with your body’s ability to ovulate when it’s supposed to, and lead to a wonky period.

Scientific evidence of antibiotics’ effect on your period

Keep in mind, studies done on this subject have all been inconclusive but I’ve seen this anecdotally in my work for many years.

It’s also helpful to keep in mind that you’re taking antibiotics because you’re likely sick or have had some kind of surgery. This is very stressful for the body. When you’re sick or have an surgery, you might experience a delay in ovulation and subsequently a delayed period. Your body basically considers these times  unsafe to get pregnant, so you might not release an egg. I know it seems counter-intuitive, like why the hell is my body not working, but it’s actually doing exactly what it’s supposed to do. That is, not having a baby when there is potential danger.

I am certainly not telling you to avoid taking your prescription. If you simply MUST take antibiotics, I recommend chowing down on lots of fermented foods like sauerkraut, kim-chi and kefir during your course of medication, and for a few weeks afterwards.

You should also take a good probiotic for at least a month after you’ve taken the antibiotics. I highly highly recommend Megaspore Probiotics. This is a very well studied brand, and highly effective at repopulating the gut.

I also recommend drinking bone broth to help mitigate any gut lining damage that might occur.

160 thoughts on “Put down the Z-Pak! The effect of antibiotics on your period.”

PrevPreviousAmenorrhea Causes – Has Your Period Gone Missing?
NextWhat do PCOS, high prolactin levels and Primary Ovarian Insufficiency have in common?Next